TEMPUS IV (2007-2013)
What is Tempus?
Tempus is a European Union funded programme which supports the modernisation of higher education in the Partner Countries in Eastern Europe, Central Asia, the Western Balkans and the Mediterranean region, mainly through university cooperation projects
Programme aims to promote the voluntary convergence of the higher education systems in the Partner Countries with EU developments in the field of higher education. In addition to promoting cooperation between institutions Tempus also promotes a “people to people” approach.
Tempus provides support to consortia of institutions composed mainly of universities or university associations. Non-academic partners can also be part of a consortium.
Tempus is open to higher education institutions and authorities, as well as all organisations and enterprises directly related to higher education.
Tempus IV (2007-2013) supports Joint Projects (JP) and Structural Measures (SM) through regular calls for proposals published on the website of the programme. Implementation of the newly selected 3-year projects of the last 6th Call of Tempus IV, which started on December, 2013, will run until the end of December, 2016.
Uzbekistan has been active in Tempus since 1994. Tempus has supported modernisation of curricula across a wide range of disciplines and contributed to ensuring their relevance to the needs of the local labour market. Tempus has also helped to modernise university governance and create new partnerships between universities and enterprises. Through creation and support of the National Team of Higher Education Reform Experts, Tempus supports the modernisation of the higher education system at a national level.
Since 1994, Tempus has funded 87 projects involving 55 Uzbek higher education institutions (HEIs) in total, including 30 regional HEIs, with an overall budget of 34 million EUR.
Tempus IV (2007-2013)
In the framework of six Calls for proposals of Tempus IV, Uzbekistan was awarded with 30 projects in total of 16.6 million EUR to be allocated to Uzbek partners:  14 Curricula Reform Joint Projects (JP), 7 Higher education and society JPs, 1 Governance Reform JP and 8 Structural Measures.
3 projects from the 1st Call  (2008): AIDA, PERSEUS, NMPLIS
4 projects from the 2nd Call  (2009): CANDI, HEICA, SWAN, UNIQTOOL
3 projects from the 3rd Call  (2010): PROMENG, UnIvEnt, CIBELES
4 projects from the 4th Call  (2011): QAPD, EPASAT, TERSID, ISMU
5 projects from the 5th Call (2012): QUEECA, GE-UZ, UZWATER, TuCAHEA, ENGITEC
11 projects from the 6th Call (2013): ITEDU, INOCAST, MACH, HIGHVEC, UNIWORK, DeTEL, SAMUz, PROMIS, MATcHES, UZDOC, UZHELTH.
Thanks to the European Commission's decision to complement the regional budget with a bilateral allocation of 5 million EUR for HEIs of Uzbekistan, 11 projects with involvement of Uzbek HEIs were selected out of 77 project proposals in 2013 (in comparison to 36 applications in 2012). Thanks to the new list of national priorities, updated by the Ministry of Higher and Secondary Specialised Education, spheres of cooperation and coverage of academic disciplines expanded much in the projects of the 6th Call. 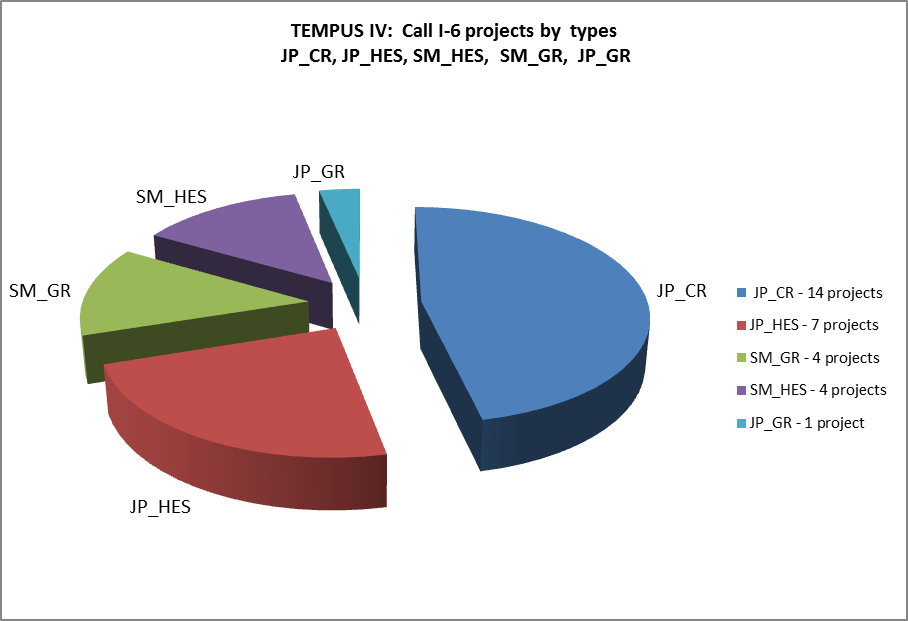 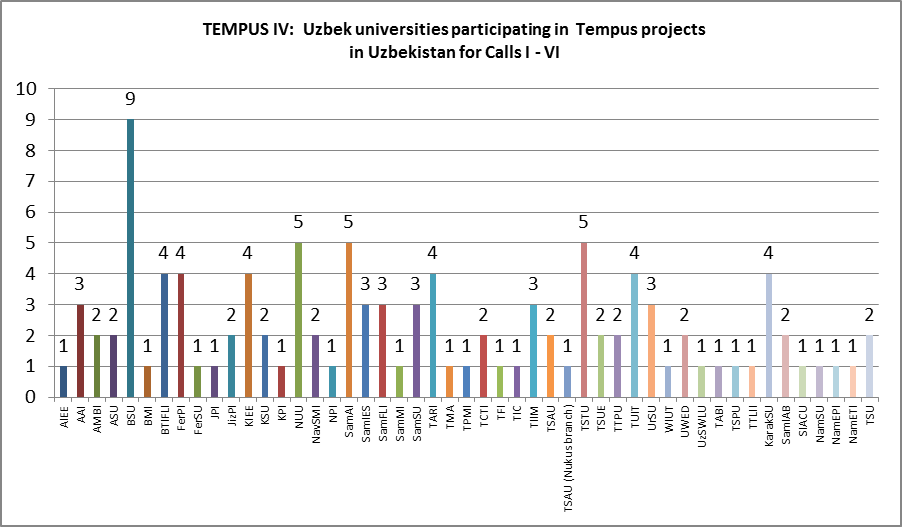 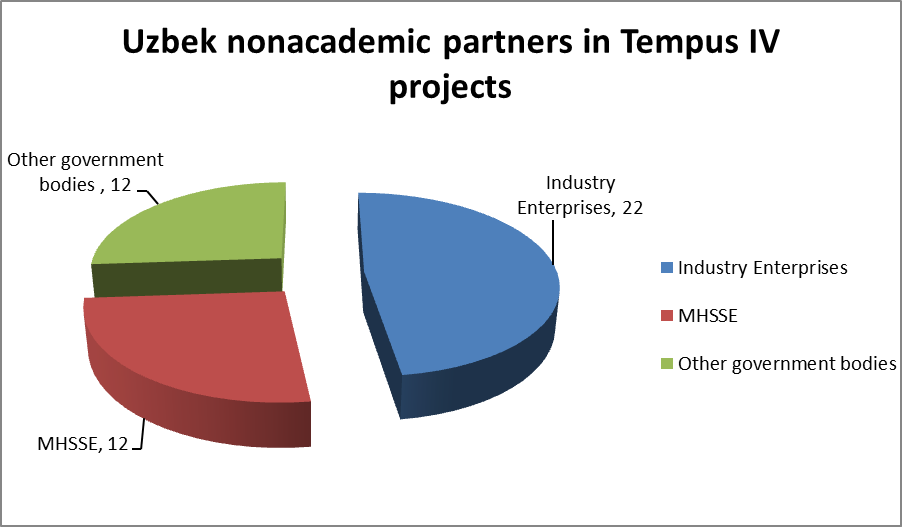 Tempus IV projects provided the basis for long-term cooperation with 70 universities and 6 non-academic institutions from 17 Member States of the European Union. 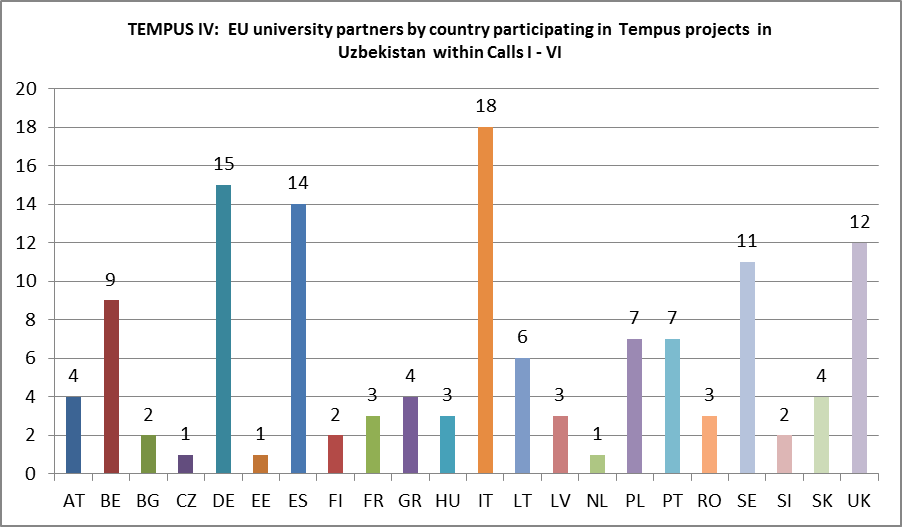 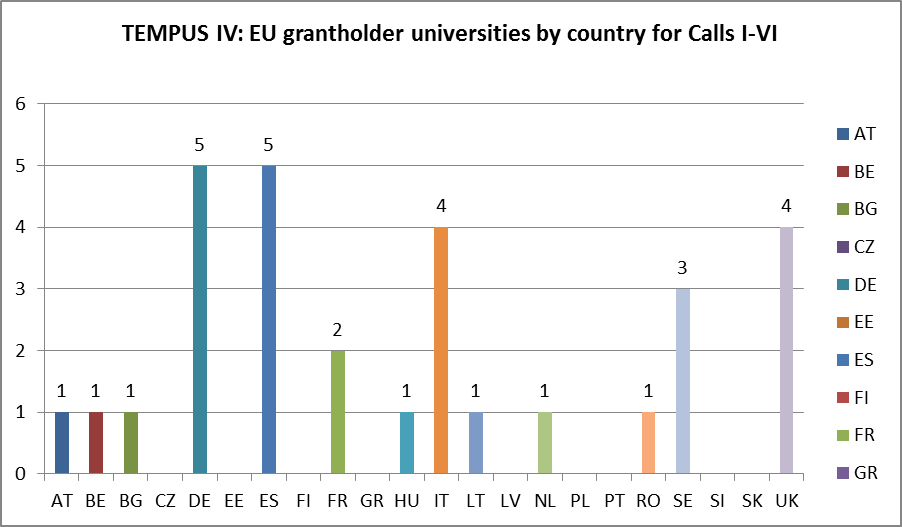 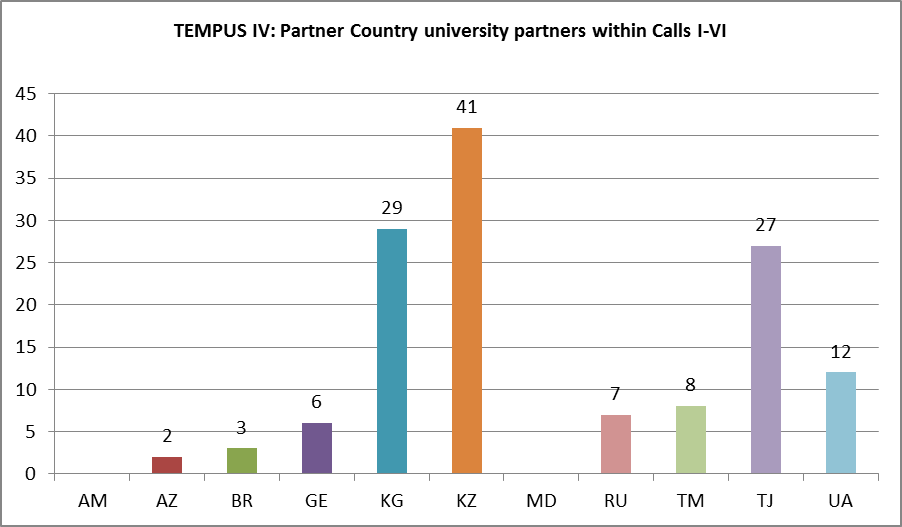 From Tempus programme to Erasmus+?
Recognition of the effectiveness of the Tempus programme and its achievements was confirmed during the discussions on the development of the new generation of European Union external cooperation programmes in the field of education for the next six years starting in 2014. The European Commission introduced to the Council of Europe the draft of the new programme - Erasmus for All (2014-2020) for the first time in November 23, 2011. It was decided to continue using the format of the programme and the main characteristics of the Tempus projects with a broad range of capabilities to assist higher education institutions in the partner countries. One type of institutional cooperation within «Capacity Building Projects» follows the format of Tempus.